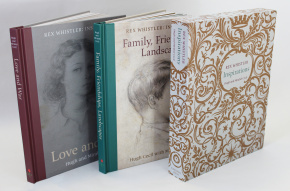 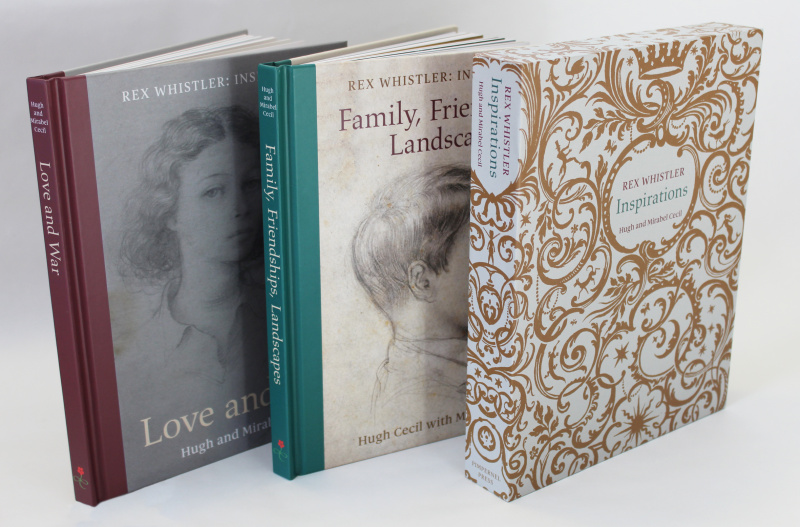 By Hugh Cecil and Mirabel Cecil

Rex Whistler (1905-1944) was one of the most intriguing artists of the interwar years. His work encompassed all areas of art and design, from set design for opera, ballet and the West End theatre to book illustration. He painted moving and memorable portraits, of people and of their houses. And he was the outstanding mural painter of his day. As a 20-year old student at the Slade School he pained a mural which an still be seen on the walls of the restaurant at Tate Britain. Later murals are to be seen at Port Lympne in Kent, Mottisfont Abbey in Hampshire, Dorneywood in Buckinghamshire and - his masterpiece, Plas Newydd on Anglesey.

This beautiful slipcase contains two individual volumes - Family, Friendships, Landscapes and Love and War. Together they describe the sources of inspiration Rex Whistler drew on for his work as a portrait painter, and as a designer of theatre sets and costumes, of books and of advertisements, and above all, as a painter of murals.

Military historian Dr Hugh Cecil's books include The Flower of Battle: How Britain Wrote the Great War (Steerforth, 1996). Mirabel Cecil is author of A Kind of Prospero (Walker, 1996) and, with David Mlinaric, Mlinaric On Decorating (Frances Lincoln, 2008). Together Hugh and Mirabel Cecil have written Clever Hearts: a Life of Desmond and Molly MacCarthy (Gollancz, 1990), which won both the Duff Cooper Prize and the Marsh Biography Award, Imperial Marriage (History Press, 2005) and, most recently, In Search of Rex Whistler: His Life and His Work (Frances Lincoln, 2012).

“Presented in a slipcase deliciously patterned with rococo arabesques, this two-volume set . . . is the present for aesthetes and lovers of the frivolous, nostalgic, romantic inter-war world of Cecil Beaton and Stephen Tennant.”

“Rex Whistler occupies a special place in the story of English art.”

“A perfect introduction to this artist, to his imaginative fantasy and exuberant delight in architecture.”

"A most beautifully boxed set of two well-illustrated and slim books describing aspects of Rex Whistler's life and work...a delight. Full of the most lovely images, accompanied by a short and well-written text. Buy it as a present for a friend, have a peek, and keep it for yourself."