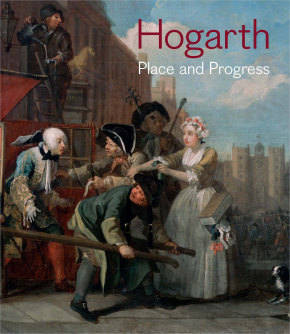 A highly illustrated journey through Hogarth’s series paintings and engravings, from the blockbuster Rake’s Progress and Marriage a la Mode to the enigmatic and lesser known Happy Marriage this book offers a close analysis of place and setting in Hogarth’s works’ in order to revisit the artist’s complex stance on morality, society, and the city, and the enduring appeal of his satires in the present.

William Hogarth (1697-1764) remains one of Britain’s best loved painters. His most renowned works, the series relating to moral subjects, are rarely displayed together, and will be united at the Soane Museum for the first time in its history.

The book also focusses tightly on Hogarth’s series; The Soane Museum’s own Rake’s Progress and An Election, as well as Marriage a la Mode, the Four Times of Day, as well as the three surviving paintings of The Happy Marriage engraved series such as Stages of Cruelty, Industry and Idleness and Gin Lane and Beer Street. It is edited by David Bindman, a world authority on Hogarth and comprises four essays by leading academics, along with Bindman’s own introduction to each of the series according to the themes of ‘place’ and ‘progress’.

Hogarth’s concept of ‘progress’ was influenced by John Bunyan’s The Pilgrim’s Progress, where the word described a journey towards moral and spiritual redemption. Hogarth: Place and Progress will explore how Hogarth’s series explore as well a darker meaning of progress, with narratives that lead through moral abandon and social ostracism, to poverty, madness and death.

Hogarth’s series present narratives with fully detailed characters, plots and changes of scene. Precise locations in London play a key role in a moral reading of Hogarth’s paintings. In A Rake’s Progress, the Rake moves from the City of London to an extravagant property in the west end, then a brothel in Covent Garden, and ultimately moves outside London, ending up in Bedlam, where his dissolute life has led him to insanity and death.

The book will demonstrate how Hogarth’s ‘Modern Moral Subjects’ married the idea of progress with the moral geography of London, in a dynamic and evolving way throughout his own progress as an artist.

David Bindman retired as Durning-Lawrence Professor of the History of Art, University College London in 2005 and was Visiting Professor of the History of Art, Harvard University, 2010-16. He has written books on William Blake, William Hogarth, L.F. Roubiliac, Canova and Thorvaldsen, and on the Briitish response to the French Revolution. More recently he has worked on ideas of race and art, is the author of Ape to Apollo and is editor, with Henry Louis Gates, Jr of the series The Image of the Black in Western Art.

Dr Bruce Boucher is Deborah Loeb Brice Director of Sir John Soane’s Museum. He taught for over twenty years at University College London and is the author of books on Palladio, and on Italian Sculpture. He is a corresponding member of the Ateneo Veneto in Venice and a Fellow of the Society of Antiquaries.

Frédéric Ogée is Professor of British Literature and Art History at Université Paris Diderot. His publications include two collections of essays on William Hogarth, as well as 'Better in France?' The circulation of ideas across the Channel in the 18th century (Lewisburg, 2005), Diderot and European Culture (Oxford, 2006), and J.M.W. Turner, Les Paysages absolus (Paris, 2010). In 2006-07, he curated the first-ever Hogarth exhibition for the Louvre. From 2014 to 2017 he was a member of Tate Britain’s Advisory Council. He is currently finishing a book on Thomas Lawrence and working on an anthology of British artists’ writings.

Dr Jacqueline Riding is author of Jacobites: A New History of the ’45 Rebellion (2016), Basic Instincts: Love, Passion and Violence in the Art of Joseph Highmore (2017) and Peterloo (2018). She is currently writing a biography of Hogarth. She is a fellow of Birkbeck College, the Society of Antiquaries of Scotland and Trustee of Turner’s House.