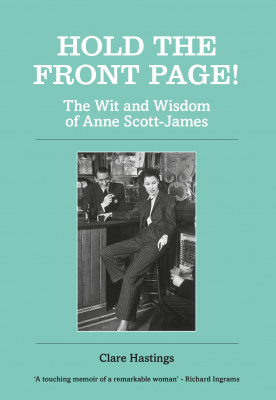 The Wit and Wisdom of Anne Scott-James

In 1953 pioneering journalist Anne Scott-James started to write a weekly column for the Sunday Express newspaper. ‘The Anne Scott-James Page’ set the bar for a new way of writing. Scott-James perfected the art of the short, sharp column – and many of the topics she covered are equally on-trend today. She cogently expressed her views on men, children, fashion, beauty, food, interiors, travel, and anything else that took her fancy. Political opinions might be squashed between thoughts on eyebrow tweezing and a piece on swimsuit lines. Scott-James was a great believer in entertaining her readers, and her columns are sharp, witty, to the point, often very funny, sometimes very moving. In Hold the Front Page! a selection of the Sunday Express columns is brought together with a commentary by her daughter, writer Clare Hastings, and with photographs from the Scott-James/Hastings family albums and drawings by Osbert Lancaster, Scott-James’s third husband, to provide a fascinating insight into the 1950s – and into the public and private life of one of the most celebrated columnists of the twentieth century.

Clare Hastings started her working life at Harpers & Queen magazine, before leaving to work as a stylist and then as a costume designer. Thirty years later Clare changed direction to work alongside her daughter, Calypso, in The Indytute. She is the author of Gardening Notes from a Late Bloomer and The House in Little Chelsea. Anne Scott-James (1913-2009) was Women's Editor of Picture Post during the Second World War and Editor of Harper's Bazaar from 1945-51. She wrote 'The Anne Scott-James Page' for the Sunday Express from 1953-57 and was a columnist for the Daily Mail from 1960-68.She also wrote for Vogue and Queen and was the author of many books including In the Mink, Down to Earth and Gardening Letters to my Daughter. She was married three times, first briefly to Derek Verschoyle, second to journalist and broadcaster Macdonald Hastings, with whom she had a son, Max, and a daughter, Clare, and third to cartoonist and writer Osbert Lancaster.

"Hold the Front Page!, compiled by her daughter Clare Hastings, is a selection of Scott-James’s articles (many of them hilarious, all of them sprucely professional) interspersed with Hastings’s affectionate but uncloying memoir. It conveys a completely vanished world."

"In Hold The Front Page Clare Hastings has compiled a warm hearted tribute to her mother the journalist and gardener Anne Scott-James. Anne, whom I knew well as a country neighbour was a beautiful and formidable woman, a pioneer in the then male-dominated world of Fleet Street, whose newspaper columns, reprinted here are still relevant and topical today. Interspersed with examples of her journalism, Clare gives us a touching memoir of her remarkable mother, like herself “strong on common sense and short on whingeing.”

"Clare Hastings' deadpan and funny reminiscences of her mother are what elevates this book above a pleasingly nostalgic read."