How to Design a Garden 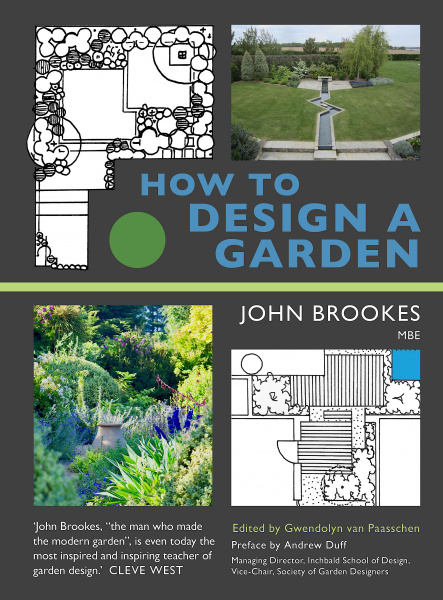 How to Design a Garden

Beginning in the 1960s, John Brookes MBE (1933–2018) revolutionized garden design, with a new design philosophy and methodology that was rooted in the notion that gardens are about the people who live in them. Recognizing the demands of the contemporary lifestyle, he broke with previous labour-intensive garden design traditions and the emphasis on showcasing plants. Instead he promoted using gardens as extensions of the home.  He introduced this notion in his 1969 book, A Room Outside, which also contained practical advice on materials, methodology, and planting. His approach was unprecedented and included the then-novel idea that people of all income levels could have designed, fashionable gardens tailored to their needs, low-maintenance, and beautiful.

John taught and lectured around the world and, thanks to his energetic writing, teaching and media appearances, he became regarded as the ‘king’ and ‘godfather’ of garden and landscape design. How to Design a Garden is an informative and ultimately practical collection of his thoughts and advice selected from countless writings and lectures given to students, professionals and the public around the world.

In addition to his teaching on how to design a garden, the book has two key themes – environmental sustainability and a focus on the local vernacular. They show how far ahead he was of his time and to what a great extent his teaching remains relevant to garden-makers today.

John Brookes designed gardens and landscapes all over Britain and Europe, and also in the United States and Canada, South  America, South Africa, Australia, Iran, Japan and Russia. He founded schools of design in Japan, Chile and Argentina and, most famously, the Clock House School of Design at Denmans, West Sussex. He was awarded an MBE for garden design and services to horticulture, the Award of Distinction of the American Association of Professional Landscape Designers, the Garden Writers’ Association of America Award of Excellence, and countless other international awards including four Chelsea Flower Show Gold Medals. He lived at Denmans until his death in 2018 at the age of eighty-four. Gwendolyn van Paasschen is a garden designer and writer. Having worked with John Brookes on a major design project in upstate New York, she helped him with his memoir, A Landscape Legacy (Pimpernel, 2018), and is now chair of the John Brookes Denmans Foundation, which is dedicated to perpetuating John Brookes' design legacy and to the preservation of Denmans Garden. Andrew Duff is Managing Director of the Inchbald School of Design and Vice-Chair of the Society of Garden Designers.

'John Brookes, "the man who made the modern garden", is even today the most inspired and inspiring teacher of garden design.' - Cleve West

"The collection of essays, articles and lectures gathered in How to Design a Garden are simple and instructive whilst also illustrating Brookes’ way of thinking, characterised by great care and wisdom offset by a witty lack of beating about the bush...Practical, insightful and innovative, Brookes’ reflections as set down in this anthology are enduringly sharp - an essential book to have in your garden library."

"A fascinating study of John Brookes' method of working. There is a great deal of common sense and inspiration...whether you are a garden owner starting out or a seasoned practitioner seeking further inspiration, there is every reason to read it."

"Many will treasure this book and value John’s design advice and philosophy which remains completely relevant and forward looking today."

"For those wishing to know more about how to design gardens, including their own, this inexpensive softback will act as mentor and guide."

“The late John Brookes was one of the greatest 20th-century British garden designers and teachers. [This] is a collection of some of his best writings and lectures, lest we forget what a witty, opinionated, clever man he was, with an acute eye for topography and the local vernacular, and an unsnobbish sympathy for ordinary gardeners with small gardens. All these virtues are present in horticultural spades in this anthology.”

"Portmanteau collection of writings, some previously unpublished, by the great modernist space-maker."

"...reads as if garden designer John Brookes, who died in 2018, is sitting next to you talking…The essence of the book is a collection of writing, lectures, articles and thoughts that John had penned over more than 50 years. Brought together by Gwendolyn van Paasschen, Chair of the John Brookes Denmans Foundation, we are treated to John's far-ranging words. Gwendolyn has done a sterling job in bringing the disparate writings together, cleverly inserting her commentary to help guide the reader.

The book does talk about design, structure, placement, context, clients, sketching, planting and so on. But it's the richness of all the other of John's observations that make it so much more.

This book is simple in its delivery - it fits perfectly in your hands and is simply laid out. Pimpernel Press is to be applauded for publishing it.”

"The art, craft and science of garden making is illuminated by the writings of a handful of great garden designers such as the late John Brookes, whose revolutionary book on the subject, How to Design a Garden, was published this year, edited by Gwendolyn van Paasschen."