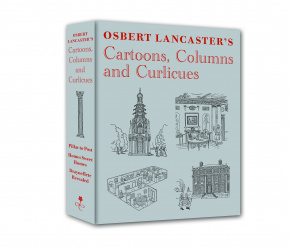 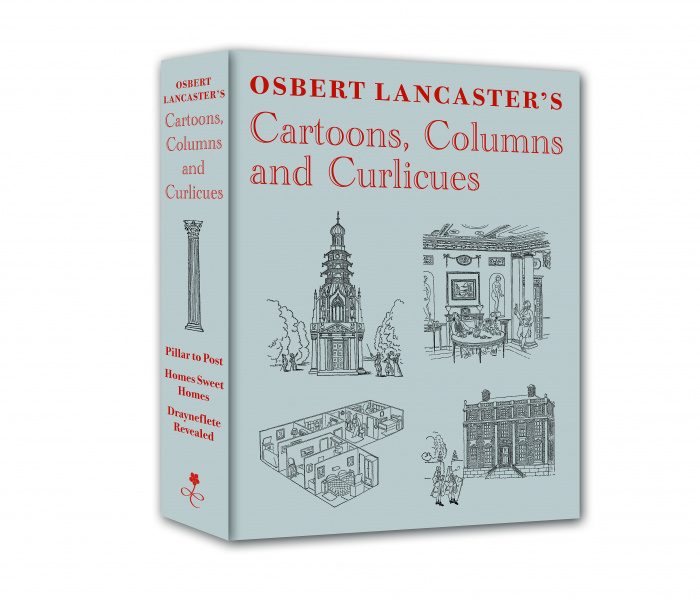 Including Pillar to Post, Homes Sweet Homes and Drayneflete Revealed

Sir Osbert Lancaster (1908–1986) was a painter, a writer, a cartoonist, a theatre designer, an authority on architecture and design, and above all a great British humorist. His pocket cartoons depicting the aristocratic Maudie Littlehampton, her family and friends, which appeared in the Daily Express for forty years, recorded in his inimitably English way the life, news and opinions of the period. His books on architecture and design were as witty as they were authoritative: in them he depicted buildings and interiors with an unerring instinct for the minutiae of stylistic change and recreated with irrepressible humour the way of life of the original inhabitants.

"Pillar to Post and Homes Sweet Homes, the first two of these reprinted volumes, were described by Ernst Gombrich as comprising 'the best textbooks of architecture ever published'....The books are as Gombrich described them, an introductory course of laconic brilliance."

“Reprinted in a delightful three-volume boxed set….a very happy Christmas present for anyone who doesn’t yet possess these corkers”

"Osbert Lancaster's humorous and influential books on British architecture and interior design reissued by Pimpernel Press. Although his books are period pieces we can learn lessons from them still. We owe Osbert Lancaster a lot."

“First order of merit goes to the Pimpernel Press, which has saved from obscurity three of the cartoonist Osbert Lancaster’s brilliant satires. These erudite spoofs are collected in a handsome box.”

“a welcome retort to po-faced modern architectural writing and as sharp as vinaigrette. Long overdue.”

"Osbert Lancaster is now forgotten or ignored as most architectural commentary adopts noisy radical ‘positions’. Three facsimile volumes of his gentle, witty, erudite illustrated commentaries have been re-issued in a slip-case as Cartoons, Columns and Curlicues (Pimpernel Press, £40).Pillar to Post (1938), Homes Sweet Homes (1939), and Drayneflete Revealed (1948) reveal an engaged, eclectic, humorous mind a world away from the tantrums of Zaha or the annoying angles of Koolhaas. Delicious."

"The set occupies less space than the average architectural monograph, but contains pretty much everything you need to know about architecture."

"A welcome chance to reappraise the genius of Osbert Lancaster in a boxed set of his three brilliant illustrated works of social and architectural satire. Lancaster's comic panagyric to human achievement and folly in equal measure is an inspiring work that balances wit with intense social acuity."

'Masterpieces of comic erudition....If you don't already know these books, you have a treat awaiting you. They sum up our architectural inheritance in a hugely entertaining and quite inimitable way.'