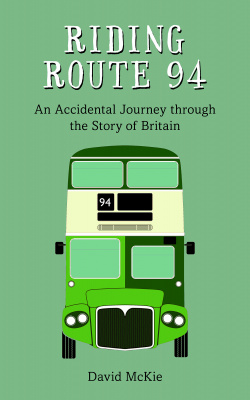 An Accidental Journey through the Story of Britain

"A potted history of everywhere [David McKie] goes, with some reflective observations about how things were and how they ought to be, and a few jokes thrown in." - Tribune

On previous journeys through Britain, David McKie headed for places he had heard of and was eager to see. But how true, how representative a picture of the country could that provide? What, he wondered, might happen if he let chance dictate his itinerary?

McKie decides to travel only where he was taken by buses with the number 94, stopping off along the way to visit often unexpected places. Chance also takes the form of unexpected encounters at the bus stop or stumbling across some fascinating slice of local history in a country churchyard.

Eschewing such simplistic generalisations as the ‘north-south divide’, he nonetheless finds themes emerging: Why do some communities thrive and grow while others seem set on a course of inevitable decline – sometimes even communities living cheek by jowl? What kind of urban landscape have we inherited from the post-war planners, whose best intentions too often took little account of how people actually want to live? And how much are our opportunities and expectations shaped by the communities we are born into?

These buses will take David McKie across the idyllic Isle of Mull (where the driver pauses to let him drink in the view), to the furthest reaches of Cornwall (‘in England, but certainly not of England’), through the post-industrial landscape of Middlesbrough, and to a whole host of places, some privileged, some bereft, some in between.

David McKie is a former political reporter, deputy editor, chief leader writer and columnist (‘Elsewhere’ and ‘Smallweed’) for the Guardian, which he joined in 1965. Born in London in 1935, he grew up in London and Leeds, read history at Oriel College, Oxford and started in newspapers with the Oxford Mail. After the Guardian, he turned to writing books, which have included Jabez: the Rise and Fall of a Victorian Rogue (shortlisted for the Whitbread Biography Award); Great British Bus Journeys; and McKie’s Gazetteer.
David McKie lives in Sutton, Surrey.

"His writing has a quality of restful immediacy: unhurried, curious, and totally absorbed. Rich in anecdote, aesthetically sensitive, historically accurate, and wonderfully witty."

"McKie works hard at his extreme bussing. Riding Route 94 gives us a potted history of everywhere goes, with some reflective observations about how things were and how they ought to be, and a few jokes thrown in."

"Anyone curious about what is going on in those parts of the country that never receive any attention from commentators, politicians or policymakers – and who might like to further their understanding of why a majority voted to leave the EU – should read David McKie’s wise, funny and humane account of travels through the unknown Britain."

"There is no dry analysis. Former deputy editor of The Guardian McKie is a highlyreadable writer, incapable of a dull sentence."