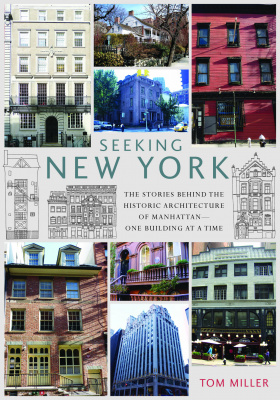 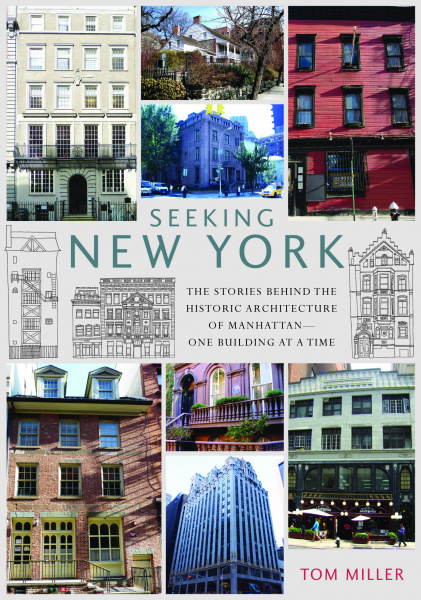 Beautifully illustrated with line drawings and photographs, engagingly presented, and richly detailed, this charming guide traces the architectural and social history of Manhattan one building at a time.

"If you’re looking for yet another photography-led coffee table showpiece of New York’s skyline, look away. NYPD police inspector Tom Miller’s book has — like most of the buildings it explores — much more substantial foundations." National Geographic Traveller

Based on the popular blog Daytonian in Manhattan, Seeking New York investigates the back stories of Manhattan’s architecture and monuments. Alongside the expected account of architects, dates and styles, it reveals the human history of the buildings and statues: the scandals, the tribulations, the joys and achievements, the humanity, indeed, of the New Yorkers who lived within these walls. Meet Dorothy Parker, S.J.Perelman, Talullah Bankhead and Irving Berlin at the Algonquin Round Table; Maisie Plant, who persuaded her husband to sell his Fifth Avenue palazzo to Cartier for $100 and a pearl necklace; James and Abby Gibbons, whose Chelsea home was one of the stations on the Underground Railroad by which fugitive slaves found their way from the South to Canada. Perhaps you would rather not meet Jack the Rat, who for a dime would bite the head off a live mouse (for a quarter he’d do the same to a rat); or Ivan Poderjay, who left his bride’s apartment for their honeymoon – with her body in a steamer trunk.

Here the ever-changing face of Manhattan is captured through the structures and their stories.

Beautifully illustrated with line drawings and photographs, engagingly presented, and richly detailed, this charming guide traces the architectural and social history of Manhattan one building at a time.

Tom Miller moved to New York City in 1979 from Dayton, Ohio, where his interest in architecture and history was sparked. Tom currently holds the rank of Inspector within the NYPD’s Auxiliary Police Force. For years his involvement with the New York Police Department – whether on patrol or marching its wide avenues – has afforded him the opportunity to see the city’s seemingly endless variety of buildings. He started the blog Daytonian in Manhattan in 2009, and since then he has investigated and researched the stories of more than a thousand Manhattan buildings. He urges New Yorkers and visitors alike to ‘never stop being a tourist’ and ‘never stop looking up’.

"I'm not sure whether this beautifully designed little book should be considered an architecture study or urban history; whichever, it's the most intriguing and attractive one I've encountered in months. Drawn from the author's blog, here are stories of Manhattan buildings - some landmarks, some merely beautiful, some of unexceptional appearance but with fascinating histories - that you may find nowhere else. If you've ever walked these city streets and wondered 'Hey, what's the story behind that building?', it's probably here. I only wish the book were three times longer, or came in multiple volumes; there are so many more wonderful but unsung old buildings in New York. Most of all I wish someone would write something comparable about Boston."

"If you’re looking for yet another photography-led coffee table showpiece of New York’s skyline, look away. NYPD police inspector Tom Miller’s book has — like most of the buildings it explores — much more substantial foundations."

"This handsome little book is small enough to slip into a backpack, and its illustrations are a delight. I thought I knew my city well, but I know this will lead me down byways I’d missed before."